A soldier’s first letter in the Army hospital

One of the poignant letters we uncovered this year came from a wounded soldier in World War I who said he had received no mail.

The letter, faded and written in pencil, was hard to decipher at first. We slowly rolled out the top creases on the envelope.

J. W. Atkins served with the American Army in France but wounds kept him in the Army hospital after the Armistice, November 11, 1918.  He dated his letter December 8, 1918.

Military records show him as a private in the National Guard, enlisting from Quanah, Texas. He was 19. He served in the 7th Texas Infantry Regiment, then the 142nd, then the 167th until his discharge after the war ended.

He fought in the St. Mihiel Sector and then in the Meuse-Argonne. The Army awarded him the Victory Medal with combat clasp.

The record shows him severely wounded on October 18, 1918. The Army estimated his disability as 10 percent on discharge.

Privatet Jerome William Atkins, Jr., was born November 3, 1897, and named for his father. Our cousin Richard Collier knew him as “Buck.”

Pvt. Atkins writes this is the first letter he has received. Whether he means in France or the Army hospital, he does not say.

He wrote above the stationery:

ON ACTIVE SERVICE WITH

rec’d your most welcome letter today & was glad to hear from you & you know that it is the first one I have ever rec’d. I have never heard from mama or any body else yet, & I began to think that every body had for gotten me. But I know it takes a long time for mail to go & come . Well you said Gertrude Ivy would like to hear from me, so I am writing her. Well I have 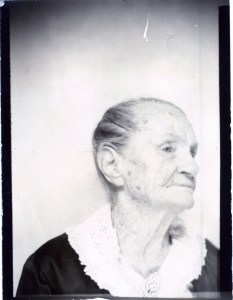 been in all the big battles & got shot down & now I am in the hospital. been here for month and half. I think I wil [sic] be comeing [sic] home soon. I will close have got to write 5 letters

Buck Atkins became a commercial artist. He died in the Dallas VA Hospital on December 31, 1962, of bronchopneumonia. He was 65 years old.