We have added more than 3,000 letters to the family archives of Hastings and Mary Pannill.  We are so busy archiving and dating letters, we have no time to read them all.   “We” means me and my assistant, Jill Brugger, who works with me on this project three days a week.

All the research we have the time to do is assign the best date we can  to the document.  Now I plan to pull a letter every week or so and reprint it.

In this first letter, Mariah Frances Hunt writes her daughter Nellie Donaldson with advice on her marriage.  She dated her letter May 6, 1877.

A couple of interesting matters outside the letter:

1.  Mariah’s maiden name was Donaldson.  She was born in 1823 in Warren County, Kentucky.  She married Benjamin Franklin Hunt in the same county in 1845.  Eventually,  the couple moved to Texas.  Mariah died in 1899.

Her daughter Nellie Hunt was born in 1856.  She married her first  cousin, William Butler Donaldson. He was the son of Mariah’s older brother.  She says in the letter he was  “much older than I was.”

Nellie and William had nine  children together — one of whom was my own grandmother, Lutie Hunt Donaldson.  The 19th  century was an era of large families.

2.  Mariah by this time lived in Chatfield, Texas, a tiny town outside Corsicana.  She writes to Nellie of Chatfield people she apparently would have known.

One of those people she mentions was a “Mrs. Witherspoon” who had “recovered from her confinement,” which I suppose means she had just had a baby.  She also writes that there had been so much sickness in Chatfield that “Witherspoon could not give his own family the proper attention if he went whenever he is sent for.”

I think she refers to Mrs. Witherspoon’s father Dr.  Witherspoon.  If so, he is my great-great grandfather.

The other  names I don’t know, but I include them in hopes my cousin Rob Jones, who is even now creating a Chatfield Museum, can tell us about some of them.  Perhaps these letters will arouse the interest of our own progeny in family history.

3.  Mariah  admonishes Nellie “not [to] give way to your quick temper” and suggests that Nellie “govern her naturally impatient temper” toward her new mother-in-law.  Mary Pannill herself had a fierce temper with her children, and family stories establish that her mother, Lutie, did as well.  Bad temper seems to have been genetic.

Mary Goodrum Pannill, daughter of Lutie and granddaughter of Nellie, discovered this letter as her interest in family history took hold.  My cousin Shirley Collier Smith tells me Mary wished to join the Daughters of the American Revolution — which required an ancestor from the Revolution — and began her research in the 1940s and 50s.

She must have begun her work before the Xerox machine made copying simple.  She made copies herself by hand in notebooks. The originals of the letters still exist and we have archived them.

She copied many ancient letters by hand.  Most of the Hunt & Donaldson letter writers had a beautiful hand. But Mary’s wins the prize.

As I said in another post, reading my mother’s handwriting is like reading the copy of cursive script placed above the blackboards of the elementary-school classrooms of my youth.  I have elected to include Mother’s copies rather than a scan of the originals. Her handwriting is as close to perfect as I have seen.    To think that my own grandchildren are no longer taught cursive because they have computers. What a mistake.

And her labor resulted in membership in the D.A.R.  The organization became one of the defining efforts of her life.  She was justly proud of what she accomplished.  Not only was she elected State Regent of Texas in the 1970s, the Texas D.A.R. awarded her the title of “Honored Daughter” after her retirement.

I offer this entire history project as penance for the times I made light of the D.A.R.  I hope she can forgive me. 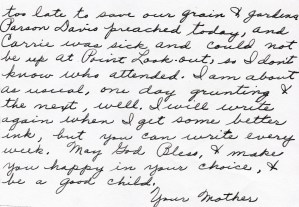 Page 3 of letter from Mariah Hunt to Nellie Donaldson