The National Guard in Detroit

On Monday of the 1967 riot week in Detroit, The Free Press decided to deploy a few reporters throughout the city during curfew each night. The editors picked three or four of the young (and expendable), including me. Our job was to ride around the city all night and report on conditions.

Dusk began falling around 7:30, but it remained bright. I think actual sunset took place about 9 p.m. Neal Shine, the city editor, assigned us each a company car and a photographer. The Free Press then had a first-class stable of photographers, headed by Tony Spina. But there were a couple of catches:

1. The Detroit News, our competitor, had a gadget called the “radio telephone.” I had 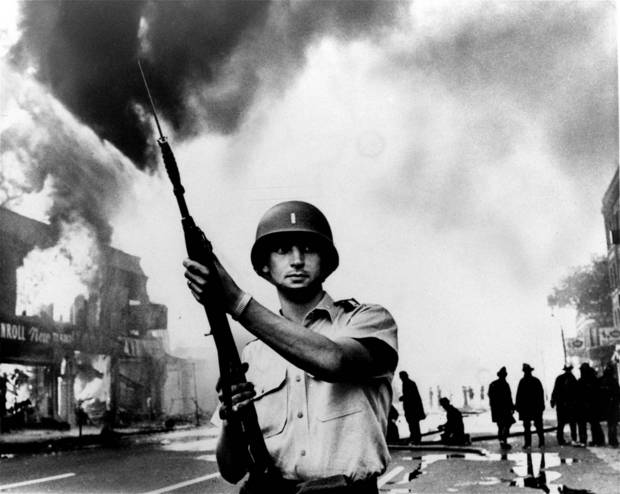 never seen such a thing. The Free Press, smaller and poorer than The News, had no communications.

Instead (and this dates me), as we set out each night from the newsroom, one of the editors handed me a couple of dollars worth of dimes for the pay phones. He told me to stop every half hour in the riot zone, find a pay phone, and call in to the paper with a report.

2. By the second day, Detroit was at the center of world news. Dozens of foreign reporters and photographers had made their way to town. Many stopped in our newsroom.

Showing Michigan hospitality, the city desk filled up our cars with out-of-town press. Many of them were foreign. I remember several from Europe.

I crammed them all in. We drove with three in the front seat and as many as could fit in the back. Our cars were all Detroit-made, of course, and equipped with bench seats. Seat belts lay in the dim future.

The photographers had to hold all their gear in their laps. I figured photographers were inured to discomfort, so I rarely looked back.

By Monday, sniper fire pinned down the police at several stations on the east side of town. Late in the afternoon, 30 fires burned in parts of Detroit.

The action covered most of the city, and the streets had fallen dark. Rioters had apparently shot out most of the street lights.  A curfew was widely ignored. The city had  called in the Michigan National Guard. They patrolled the city in combat gear – fatigues and helmets and rifles. Some carried loaded weapons. This was not a good idea.

One night,  we climbed into oure company car and pulled out of the parking lot behind the Free Press building. I headed over to Woodward Avenue, the spine of the city. Woodward runs from the Detroit River to the city’s boundary at 8-Mile Road.

Hudson’s Department Store stood in downtown Detroit as a landmark of the city. My wife and I had made many shopping expeditions into Hudson’s.

The Michigan National Guard had set up a checkpoint in front of Hudson’s on Woodward Avenue. No doubt Hudson’s would have made a tempting target for looters.

As we passed in front of Hudson’s, a Guardsman stopped our car and walked over to inspect us. He carried an M-1 rifle.

The M-1 came into service in World War II about the time of the Battle of Guadalcanal in the South Pacific. The weapon was semi-automatic. That means that each time you pulled the trigger, the piece fired one round and automatically loaded another round in the chamber.

The M-1 took an eight-round clip. In other words, a soldier could fire eight rounds before reloading. The weapon took large rounds of .30 caliber.

I recall the instructions of the platoon marksmanship instructor in boot camp. He said, “The only time to be afraid of this weapon is when you are in front of the muzzle.”

A Guardsman walked up to the driver’s door of our car and laid his M-1 on the window jamb. Suddenly I was in front of the muzzle. The muzzle pointed at my chest.

I knew the weapon well, having carried one throughout my assignment to the 2nd Infantry Training Regiment at Camp Pendleton, Calif. I had fired the M-1 many times.

I saw that the Guardsman not only had his finger on the trigger but had pushed the safety lever off. At Camp Pendleton, these would  have been court-martial offenses. A noise or a sudden movement might well cause the Guardsman to jerk the trigger at point-blank range.

He asked for my press pass to allow me to break curfew.

“Take your finger off the trigger and put the weapon back on safety,” I said. I was trying to face down an untrained militiaman playing soldier.

He did, however, remove his finger from the trigger and put the weapon on safety. I showed him my press pass. I did not thank him.

The Johnson Administration had placed the National Guard on Federal service under command of the Regular Army. On Tuesday, President Johnson had ordered in both the 82nd and 101st Airborne Divisions.

Lt. Gen. John Throckmorton, commanding general of the 82nd Airborne, took command in Detroit and ordered all troops to unload their weapons. The Airborne – elite troops — obeyed, but not all National Guard units got the word.

Forty-three people died in the Detroit riots. The Free Press carried out an investigation of each death by three reporters – Barbara Stanton, who as I recall covered the courts, Bill Serrin, the general-assignment reporter hit by a brick while reporting on the first day of the riot, and Gene Goltz, with whom I had worked in Houston.

All these reporters knew what they were doing. The Free Press published their report on September 3, 1967, under the headline, “The 43 who died.”

The story found that the National Guard had been “involved in” eleven killings “in which nine innocent people died.” See newspapers.com/newspage/98689119.

I had learned why.

One Response to The National Guard in Detroit