The racial violence of July 2016 has brought to mind the Detroit riots of 1967. I worked throughout the riots as a 27-year-old reporter for The Detroit Free Press.

On Sunday, July 23, 1967, the day the riots started, I had returned from two weeks of summer camp in the Army Reserve at Fort Leonard Wood, Missouri. My wife Deborah and I lived in a one-bedroom apartment in a modernist building named One Lafayette Plaisance that overlooked downtown Detroit from the east.

With no military muster that Sunday morning, we were enjoying the day off. I noticed smoke rising from the west side of town. Thinking perhaps there was a large unreported fire, I called the city desk of the paper to alert the editors.

I worked Monday to Friday in those days. The paper had assigned me to the City-County Bureau, headed by the late Jim Mudge, which covered both City Hall and Wayne County. The two governments shared an office tower on the river front. At some point that year, the city editor, Neal Shine, assigned me to the schools beat. I worked one job or the other that summer.

(The third person in the bureau was a bright young graduate of the University of Michigan named LaRue Heard, who talked to me about heading to journalism school at Columbia University. I learned today that after she finished at Columbia, LaRue died in a car crash in the Caribbean in 1969 on her honeymoon.)

When I called in, an assistant city editor told me a race riot had started along 14th Street on the West Side. The editor told me to report to the office. It was all hands on deck.

The Free Press then operated from 321 W. Lafayette, a 1920s building less than a mile away. I especially recall that the building lacked air-conditioning in the Michigan summer.

The riot had started early that Sunday morning when the police raided a blind pig – an illegal gambling site. A fellow reporter named Bill Serrin had gone out Sunday morning from the Free Press to cover the riot. While Serrin watched from the crowd, a rioter threw a brick that struck him in the head. Our photographer took a picture of Serrin with blood streaming down his face and staining his shirt.

I reported to the city editor. The City-County Building closed on a Sunday, so the city desk sent me to police headquarters, a few blocks away in downtown Detroit.

I never been in police headquarters in Detroit. The city editor said Governor George

Romney was meeting with Mayor Jerome Cavanagh, whom I knew. They instructed me to cover the press conference.

When the meeting ended, the governor decided to fly over the riot area in a helicopter of the Michigan National Guard.

By this time, a gaggle of reporters from the national newspapers, wire services, and television networks had flown into town. There were perhaps a dozen of us. The governor’s staff announced there was room for only one reporter on the helicopter and suggested a pool.

A pool means the reporters from the various organizations pick one reporter cover with the event. That reporter afterward pools his information with everybody else.

Someone organized a drawing, and to my surprise, I won. I became the pool reporter. 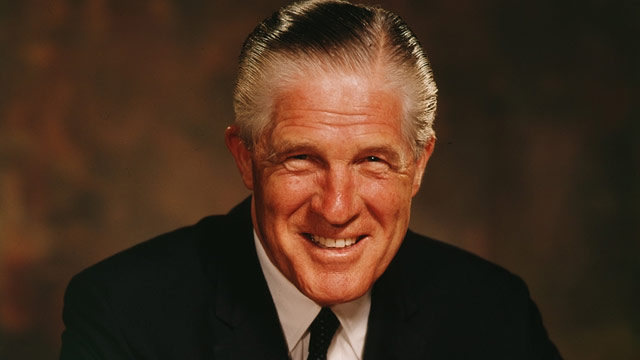 An aide escorted me to the governor’s limousine outside. By now it was growing dark. I carried my ever-present stenographer’s notebook, introduced myself to the governor, whom I had never met, and slipped into the back seat of the limousine.

Governor Romney rode in front. He had a driver, who I assumed was a member of the state police, but no other security. I made desultory efforts at conversation with the great man, but he seemed lost in thought.

We took Gratiot Avenue east. Gratiot runs at a 45-degree-angle from downtown. A small airport sits near the city limits on east side of town.

A military helicopter awaited, and I followed the governor inside. The helicopter lifted up into the air and proceeded west to the danger areas.

There were seats, but we stood to look out the open sides. Helicopter noise deafened us.

Riots had broken out in several parts of the city, and we could see flames along many streets. The governor pointed occasionally to the ground, but I could not make out what he was saying.

When we got to the epicenter at 12th Street on the west side, fires were consuming buildings. It was as if we were staring into a huge campfire.

The governor began talking again, and I strained to listen. But it was no use.

After perhaps an hour, the helicopter set down again at the east side airport. We waved to the pilot and moved into the limousine. The car glided back downtown.

I realized I had no story. The governor had taken an inspection tour, but there were no quotations jotted down in my notebook.

Governor Romney seemed taciturn. As the car zipped down Gratiot, I tried to draw him into conversation about his impressions of the burning city. Mostly I got monosyllables — no real conversation.

I had a quotation.

When the limousine dropped me off at police headquarters, I met with the pool. I gave them the few facts of the inspection trip and then read them what the governor had said. I phoned in my report to the city desk and went back over to the office.

The Free Press is a morning paper. I hardly expected my puny little story to lead the news the next day, but I thought the rewrite man would at least pick up the quotation about World War II. But I read the paper in vain.

However, the wire services, the national newspapers, and the news magazines such as Time all picked it up. It was what H. L. Mencken, in his classic memoir Newspaper Days, labeled “creative journalism.” 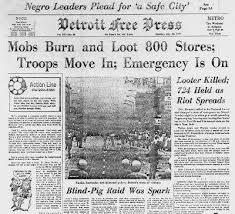 4 Responses to Reporting the Detroit riots, 1967