Under Confederate fire at Morris Island 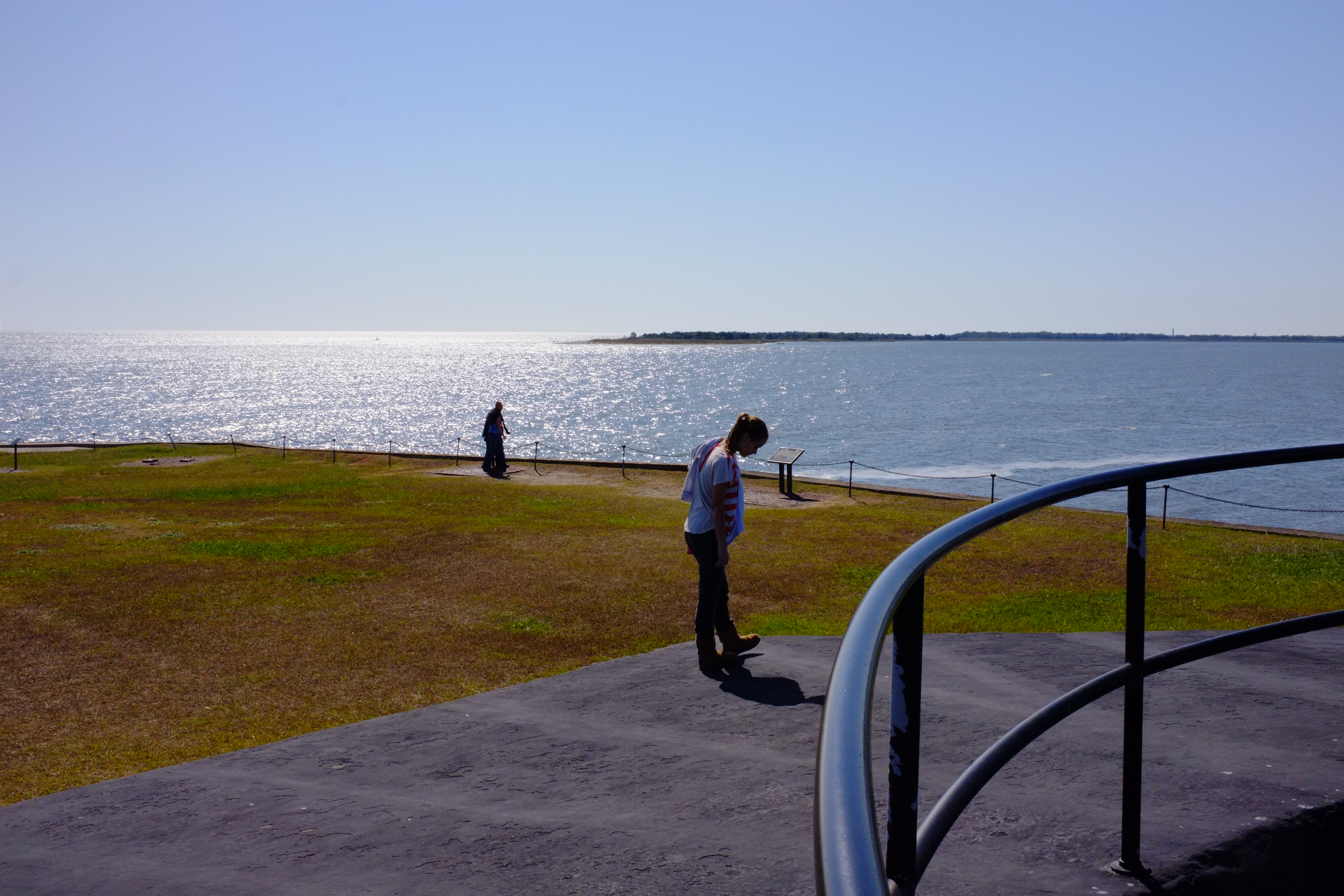 The prison ship Crescent City had stopped at Beaufort, S. C., to land forty of the prisoners who had suffered severe wounds. Many had lost limbs. These the United States Army consigned to the military hospital in Beaufort. Beaufort today, an historic town, is the gateway to Marine Corps Recruit Depot Parris Island.

The remaining 560 prisoners disembarked at Morris Island, south of the entrance to Charleston Harbor, to march to a new prison. Captain Walter McRae of the 7th North Carolina wrote:

When we finally came out [from below decks] into the light of day and had a look at one another we were astonished to note the ravages made by the terrible heat and the nauseous confinement. One could scarcely recognize his best friends.

Quoted in Mauriel P. Joslyn, Immortal Captives, p. 86.  Joslyn has collected most of the diaries and memoirs of the prisoners and even their guards, and this post follows her book.

Their guards were the 54th Massachusetts, the first regiment of United States Colored Troops and the subjects of the movie Glory (1989). The regiment had assaulted Fort Wagner on Morris Island in September 1863 but failed to take it and suffered heavy losses. The Confederate army later withdrew from the fort.

Colonel Edwin Needles Hallowell had succeeded Colonel Robert F. Shaw in command of the 54th Massachusetts. Colonel Shaw had been killed in the battle.

Hallowell himself had been severely wounded in the groin and face in that battle. He had lost an eye. He was bitter towards the Confederate prisoners under his command.

After ten days, we were landed on Morris Island, which the enemy occupied. As we landed, we were marched between a column of Negro troops, the first we had ever seen. All agreed our blood boiled at the scene.

The guard, which consisted of five companies of the regiment, marched the prisoners about three miles along the beach. Captain Henry Dickinson of the 2nd Virginia Cavalry wrote:

The gait was so rapid and we so weak that many of us broke down about one and one-half miles from the wharf, when we halted to rest, and as it just then commenced to raining hard, we eagerly caught water in our hats to drink, having had none for twenty-four hours.

We passed in front of Fort Wagner, being then between it and Fort Sumter [in Charleston Harbor], we continued in same direction, but a few hundred yards when we run into a pen made of pine poles planted in the ground, about 12 feet in length, making a picket fence with a parapet upon it . . . . 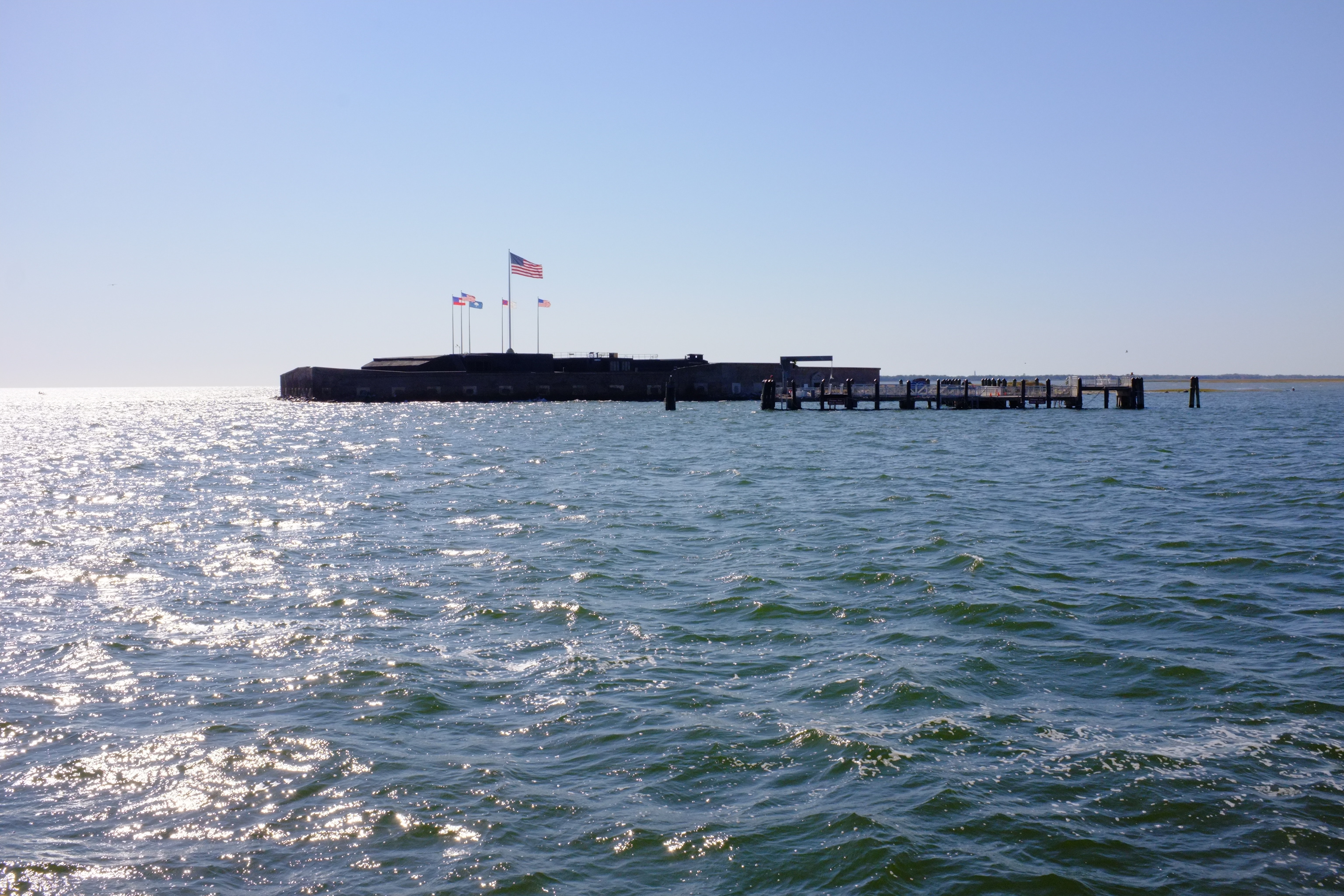 Joslyn, p. 88. This was their new prison. The pen sat in the sand on the year-old battlefield of Fort Wagner. The Confederate gunners in the harbor had to fire over the prisoners to reply to the Union guns in Fort Wagner.

The United States Army began moving guns around the pen, apparently to draw Confederate fire. Joslyn, p. 93. The Confederates returned fire with shells that arched over the pen and burst on Fort Wagner behind them.

“We can say that we are undoubtably [sic], emphatically and unequoivically [sic] under fire,” wrote First Lieutenant W. A. Ford, 20th Virginia Cavalry, Joslyn, p. 94.

Colonel Hallowell was not satisfied with placing his prisoners in the line of fire of Confederate artillery. He retaliated beyond the commanding general’s orders: he reduced the prisoners’ rations below those issued to Union prisoners in Charleston. Captain Junius L. Hempstead of the 25th Virginia Infantry wrote:

Saturday, September 24, 1864.– Drew for the day 2 hard-tacks [biscuits] and a pint of rice for supper. How I suffer for something to eat.

He replied that it was all right; there was meat enough in the meal, bugs and worms, and that if he had his way he would be only too glad to feed us on greasy rags.

After about three weeks, Hallowell cut the rations to a quarter of the regular amount. He had also stopped all mail. The Union prisoners in Charleston continued to receive mail and rations. Joslyn, p. 101.

We were put into a stockade built for this purpose, just in front of Fort Wagner, which they occupied and which was then firing at our forts and was being constantly fired at by our side. Of course, the shells directed at Fort Wagner passed just over our heads.

We were also placed on one-quarter rations and were in the hot sun here for six weeks, fed upon meal and soup. The meal was musty and wormy, and one pint had by actual count 117 small worms in it. All was of this description.

INTERIOR OF STOCKADE BUILT FOR CONFEDERATE OFFICERS IN 1864

The prisoners also suffered from a shortage of water. Several dug wells in the sand outside their tents. One officer dug

down but discovered the body of a soldier of the 54th Massachusetts killed the year before in the battle. He closed that well. Joslyn, p. 102.

Most of the officers suffered by now from dysentery. Joslyn, 101, 103. Second Lieutenant Samuel H. Hawes of the Orange Artillery, Orange County, Virginia, wrote:

20th Sept. – Still at Morris Island – the rations given us are abominable, rancid meat, with hard crackers in which we can see the worms and bugs crawling through, we are weak and suffering on account of this detestable manner of living . . . .

At the end of September 1864, prisoners began to die of chronic diarrhea. On September 27, Lieutenant W. P. Callahan of the 25th Tennessee Cavalry died. Joslyn, p. 124.

That same night, Lieutenant Frank Peake of Morgan’s Raiders became desperately ill with abdominal cramps. Because of the prison curfew, the prisoners could not leave the tent to report his illness until 9 a.m. when an Army doctor appeared.

The doctor insisted that Peake walk to the medical tent. But he could not walk. So the doctor said he would first see the prisoners who had reported to the tent. By afternoon, when the doctor went to the tent, Peake’s condition was hopeless. The prison staff moved him to the hospital, but he died on October 2. Joslyn, p. 124-25.

Another lieutenant, John C. C. Cowper of the 33rd North Carolina, had been wounded in the lung the year before at Gettysburg. He died of pneumonia on October 14. He was 22 years old. Joslyn, p. 125-26.

The shelling of Charleston went on. Captain Bedford of the 3rd Missouri Cavalry wrote:

October 17th . . . Heavy shelling last night. The Yankees shelling Sumter, Sullivan Island and the city [of Charleston]. The Island [Confederate] batteries responded vigorously throwing the shells very accurate for a while, but soon lost range and began to throw them too close to be healthy. Some shells bursting over us and the pieces falling all around us and we fearful to move as the sentinels would fire on us if we came out [of the tents], so we had to stand it. It is an awful situation to be in. I have been under fire many a time, but never before on quarter rations and double fire.

At length, during a truce in October, the Union provost marshal made an inquiry into the rations after complaints from the prisoners. “[I]t was found that [Colonel] Hallowell had not been issuing what [General] Foster had ordered. . . .” The United States supplemented the starvation diet.” Joslyn, p. 129.

At the end of October, General Foster received orders to stop shelling Charleston. This removed the rationale for retaliation against the Confederate prisoners.

The weather grew cold, and the commanding officer at Morris Island ordered Colonel Hallowell to issue blankets. But Hallowell did not carry out the order. Captain Hempstead wrote:

Monday 26th 1864.– Clear day. Very cool in the morning, hot at noon. Have no blanket – slept on the sand. Quite a soft bed but cold. I tell you, hope they will issue some blankets to us for we need them badly. They have promised us some, but I have found the Yankees promises pie crust, made to be broken. They tell us so! so! many lies. Never trust a word they say.

The horrors of Morris Island were not to be compared with what awaited us on the coast of Georgia.